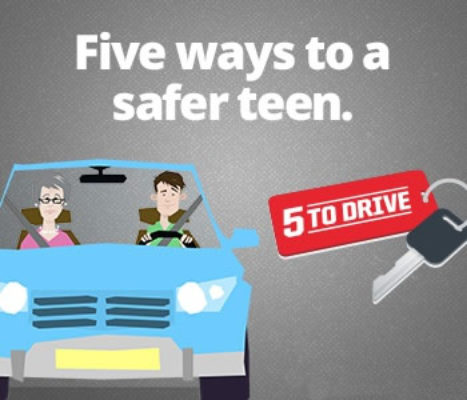 National Teen Driver Safety Week (NTDSW) is October 18-24, 2015, and we are helping to spread the word about the National Highway Traffic Administration’s (NHTSA) “5 to Drive” campaign. This campaign gives parents an opportunity to talk with their teens about how to avoid the five deadliest habits of teen drivers:

We would like to bring attention to a habit that can sometimes be overlooked when coaching teen drivers because of their legal age: impaired driving.

Talking With Your Teen about Alcohol

According to the NTHSA, impaired driving due to alcohol accounts for 19% of fatal crashes of young drivers 15 to 19 years old. None of the drivers in fatal crashes were old enough to even buy alcohol, yet one in five had been drinking. This indicates that every parent should discuss drinking and driving with their teen, regardless of how trustworthy they believe their child to be.

First, your teen needs to understand that this is no just a rule for the inexperienced – it is the law. Stress to your teen that no one should be driving after using alcohol or drugs; there is no age of maturity that makes this okay. Therefore, it is not a sign of being “grown up” if they try to handle a vehicle while impaired. There is no such thing as a “good drunk driver”; it doesn’t matter if that person has driven under the influence of alcohol without crashing.

Next, make sure that your teen knows that a driver does not need to be “acting drunk” to be impaired. Alcohol can impair judgement and slow reaction time even if the person’s outward behavior isn’t effected. This is also an opportunity to remind them not to get in the car with a driver who has been drinking just because they seem to be acting normal.

Finally, have a plan in place that your teen can rely on in the case that he or she uses alcohol or is stuck in a situation with another impaired driver. Make sure it is clear that you can always be called for a safe ride home. You might be upset, but safety comes first, and you can discuss and deal with those issues after you have both arrived at home. You might also want to include a list of friends or relatives who have agreed to be a backup for a “safe ride call.”

This might be an awkward conversation with your teen, but it could ultimately be life-saving. For more information to help parents discuss safe driving with teens, visit www.safecar.gov/parents.

Talking With Your Teen about the MOTOsafety Device

If you are considering a MOTOsafety device, you might have one important question lingering and holding you back: How do you discuss this with your…

One of the scariest parenting tasks you will ever have to take on is preparing your teen to get a driver’s license. As you try to maintain your…